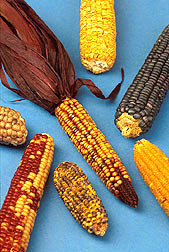 With the recent health scares over some of the most common dry dog foods, we know that our current readers and dog lovers everywhere have a lot of questions. It’s hard to understand everything that is happening with these foods and why many dogs are getting sick. We don’t have all the answers, but we have been doing lots of research into the ingredients and manufacturing process, to try to shed some light onto what could potentially be going wrong. We have been hearing a lot about aflatoxins recently and these were the reason for pet food recalls by Diamond Pet Foods in 2005 and in 2011, while several other dog food companies did voluntary recalls of their food associated with this issue. This is obviously a recurring problem and we set out to find what aflatoxins are, exactly. Here’s what we know.

Aflatoxins are a commonly occurring mycotoxin from mold spores, or fungi. They are a waste product produced by common mold spores that are usually seen on corn and some other grains. Aflatoxins are in and on many things in nature, and get ingested on a somewhat regular basis. Corn, peanuts, and cottonseed are the most highly affected crops in terms of aflatoxin contamination. The level of aflatoxins also increases in times of dry weather or drought, such as the ongoing drought issues in the midwest and other areas.

If a human or animal was exposed to a high level of aflatoxin at one time, the symptoms could include fever, lethargy, jaundice, severe diarrhea, and bloody stools or vomiting. This is called aflatoxosis and is a serious illness. These toxins are not often seen in high levels in dry dog food, which is why the food gets recalled if severe symptoms are seen after feeding from a new bag of food over a short length of time. Aflatoxins, when in food, have to go through the liver to be digested. This often means only that the liver has to work a little harder, but can metabolize and filter out the toxins. However, when food products contaminated with a low level of aflatoxins are fed regularly and over a long period of time, the body has a harder time in the defense against them, potentially causing long-term damage.

The FDA requires a very low parts per billion of aflatoxins in human grade food products, and dog and cat food. In fact, the required level is 20 parts per billion of corn or grains with aflatoxins. There have been laws passed in some American states stating that the correct level of toxins can be reached by blending contaminated corn with corn corn containing little to no aflatoxins, thus making a large batch that is at the correct level or below in several areas when tested. The problem that occurs here is that the blended corn could have some portions that are much higher in the toxins, therefore if it is ingested, it can cause aflatoxosis.

So what does this have to do with pet food? Many lower quality foods contain corn, ground corn, and corn gluten meal as one or more of the first five ingredients. Corn is highly susceptible to aflatoxins. With the blending of the grains with higher levels of aflatoxins occurring, this likely means that several batches of domestic pet food are made with a level of aflatoxins that the body has to work continually to digest. So, this is a very likely reason for many dogs getting sick from low quality dog food. The dogs are fed the food over long periods of time, working the liver and kidneys very hard until it gets to the point that they cannot fight it off as well. This is not the fault of the owners, so don’t feel like there is something you could have done: but now that you know, there is.

Want to avoid sickening your pet with aflatoxins? Here’s how: keep these warnings in mind for the future, and avoid corn products and corn gluten meal in the foods you feed your dog!

Being informed is the best possible way to make the right decision for your dogs health. Always read your labels, and if you don’t know what an ingredient is, look it up. Research is the best way to keep yourself informed. We will continue to explore dog food ingredients and issues, and bring you useful information and further articles on how to choose a quality dog food, as well as some homemade food recipes we are working on.